Through all these years since 2013, we met a lot of amazing startups (and people), and we think it’s a great time to share some of their stories with you. We’re pretty sure you will have some great things to learn from them, as they’ve been through a lot of challenging and exhilarating experiences.

We will start this interview series with MorphL and their CEO, Ciprian Borodescu since today is a big day for them: they have been accepted into the Techstars Montréal AI accelerator, an achievement that’s worth celebrating with the whole community. So let’s hear what Ciprian has to say about their time at TechHub and what are their plans for the next months while in Canada.

What made you decide to move your office to TechHub?

I joined TechHub Bucharest back in 2015 because I wanted to meet and learn from other fellow entrepreneurs. And I never looked back!

Working from and being part of TechHub Bucharest has been one of the best decisions I took even before starting MorphL.

The overall ecosystem at the hub has some of the most important ingredients you need in a startup: meetups and events that happen almost daily, startup teams swarming tirelessly, plus the connections, excitement, and energy that comes with it.

I can’t think of any place that’s better than TechHub for a tech startup like ours!

What does it mean for you to be part of the TechHub community?

Joining TechHub Bucharest coincided with starting the BucharestJS meetup on April 1st, 2015 and, for me, that was one big surprise!

In just a few months, BucharestJS became the go-to community for anyone passionate about JavaScript.

What started as a way to meet and interact with fellow JS developers in Bucharest turned into something much more profound that positively impacted me on a personal level.

The TechHub community was a great support in getting things off the ground and then amplifying them to reach more and more developers.

You’re here for almost 5 years and counting. What made you stay for so long?

During these past 5 years, I realized the meaning of a word that, to me, sounded empty until I experienced it firsthand: COMMUNITY.

I'm incredibly grateful for the people I met at TechHub by being involved in various roles in meetups, hackathons, and workshops.

I wish more people understood the power of #GiveFirst - the Techstars mantra. Although I felt it and I’ve been living it for so many years (continuing to do so the best I can), I was never able to articulate it clearly until I read Techstars’ perspective on it. Now, when people ask me why I do what I do, I can point them to their words:

“Give first means being willing to help other people without any expectation of return. It's not altruism, you do expect to get something back, but you just don't know when, from whom, in what consideration or over what time period."

Give first is a core value at MorphL, and the reason we started it as an open-source project back in 2018. I’m happy to say the same is true of TechHub. This match between our principles and way of doing things is what has made us a loyal and active member of the community. 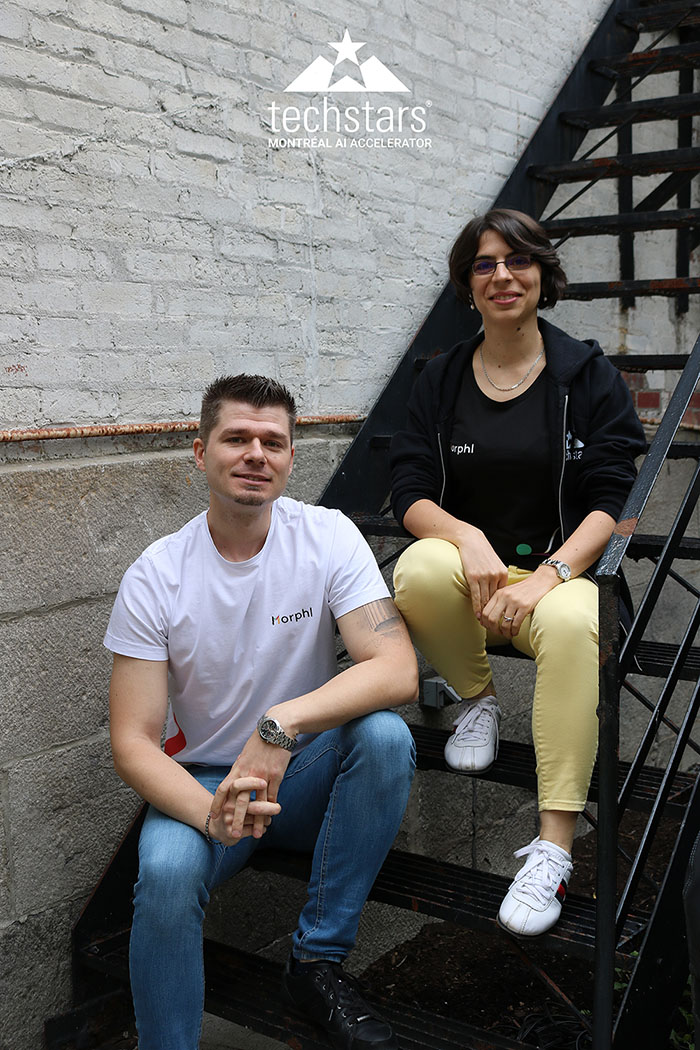 And now, let’s address the elephant in the room. You got into the AI batch at Techstars. What do you expect from this experience? How does it feel?

We expect Techstars to be one of the most thrilling and intense experiences from our evolution as startup founders. I’m certain it will stretch us to grow and learn more than ever before, so we can be better leaders for our team and give back as much as we can to the community.

Myself and Alexandra, the MorphL co-founder and CTO, will be in Canada for 13 weeks, soaking in all the knowledge from the incredible mentors in the program.

Being the first Romanian startup that joins Techstars Montréal AI is a privilege, especially given the ecosystem’s rich background in AI research.

We’re excited to join the Techstars network that Romanian startups such as TypingDNA, MEDIjobs, NiftyLearning, Appsulate and Planable are already part of.

We’re always looking for fresh startups to join our community, so if you are looking for a place to work from and be surrounded by some excellent professionals and fun people, drop us a line at hellobucharest@techhub.com and book a tour with Maria.

TechHub, the home of tech startups and scaleups, has partnered with Deloitte Propel to work together to support early…

TechHub Accelerate – what is it, and how can it help me and my business?